The Amazing Bird of Prey 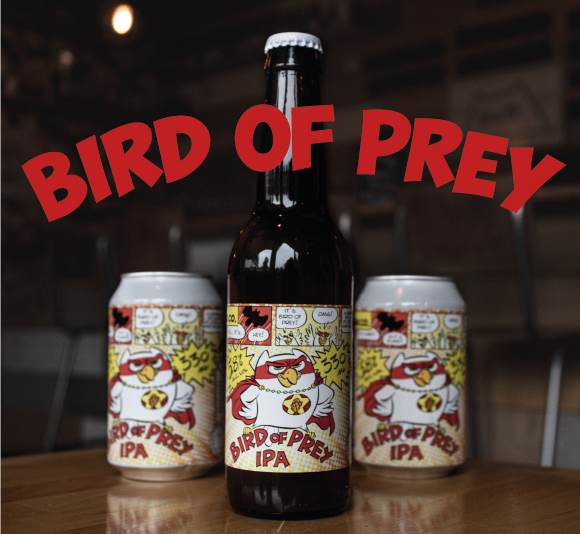 Bird Of Prey has long been our best selling beer, it’s the leader of our core range flock and is the closest thing we have to a ‘flagship’ beer. We’ve brewed it dozens and dozens of times, each time aiming to perfect that recipe. I know this one like the back of my hand. I never get bored of it, and I never underestimate it. It’s one of my favorite beers of all time. I’d love to tell you all about it!

The IPA is an old-school beer style, and a staple of the Craft Beer industry. Every brewery worth its salt needs a really good IPA. There are loads of different IPA variations doing the rounds these days; Black IPAs, Brut IPAs, Double IPAs, and for some reason the Session IPA (I will happily share my thoughts with you on the ‘Session IPA’ in a future blog post!), but for me, you can’t beat the classic. A really good, straightforward IPA, in my opinion, is about as good as beer gets. A lovely malty base holding up a huge wave of hoppy goodness?! Yes, please.

Such is the case with a lot of things in life, simplicity is the key. There are no fancy tricks or special techniques with Bird Of Prey, instead we aim for a finely-tuned balance of really fresh flavors and aromas. The recipe itself is simple: A blend of pilsner and pale ale malts give us a clean, slightly caramelly base over which we can give the hops a chance to really shine. As with most of our hop-forward beers, we use an awful lot of late hop additions. Bird Of Prey has huge amounts of Citra, Mosaic and Chinook added to the whirlpool to give it heaps of pineapple, passionfruit, citrus, and peach character. Later on, we add a massive dry-hop addition of super fresh Mosaic, Amarillo, and Citra to create an unbelievable hit of fresh hop aroma. The result is a super balanced, easy-drinking, classically styled IPA showing of a metric f*ck-ton of super fresh hop character.

We recently received a gold medal at the Dutch Beer Challenge; a huge honor for us. We’re not usually fussed about awards and accolades at all, but this one felt particularly good. It represents our years of hard work with Bird Of Prey and every tiny adjustment and development we’ve made in order to perfect it. In a craft beer scene putting out some truly incredible IPAs, to have ours picked out as the best is something really special to us.

By now, Uiltje is known for doing things our own way, we’re known for the chaos and bat-shit crazy ideas that just shouldn’t work but somehow do. We work best when we don’t overthink! It’s what makes our brewery such a fun place to be. Bird Of Prey is a little different though, this one has taken years of pain-staking development and minute changes to get it exactly how we want it. We all have terrible attention spans, so this level of commitment is a real achievement for us… Oh look, a butterfly!

So yeah, Bird Of Prey represents all our hard work and our development as a brewery, from Rob’s experimental brew days in his little flat, to brewing up big ol’ 100hl batches of it. Bird Of Prey is a really special beer to us all, and we’re super excited to keep improving it and brewing the best batches we possibly can!

With this week’s blog, we’re going back to basics and looking at one of the four key ingredients in...