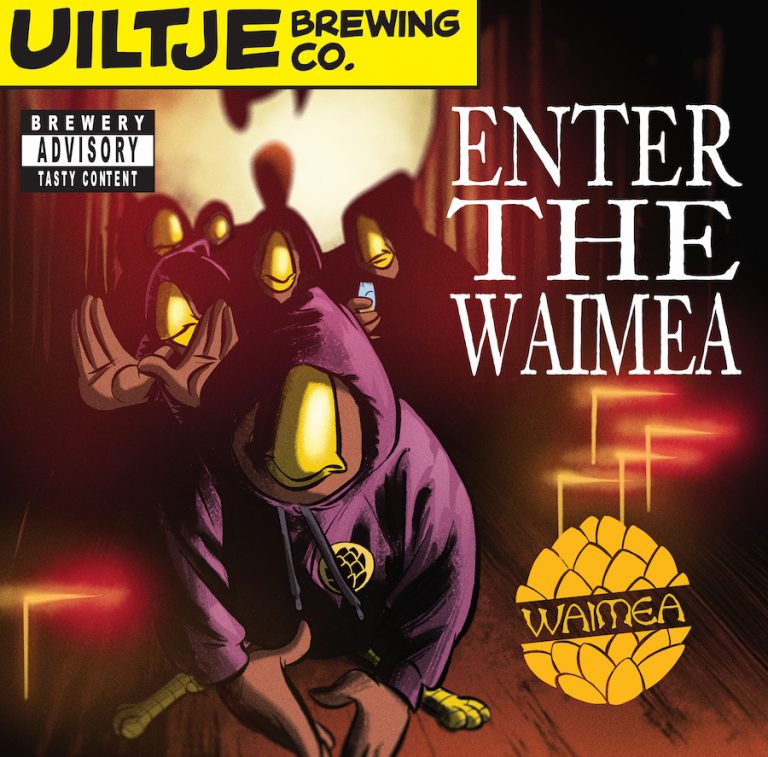 Uiltje Brewing Company recently released the New Zealand Double IPA ‘Enter the Waimea’. An ode to the Wu-Tang Clan’s iconic 1993 debut album, ‘Enter the Wu-Tang’ (36 Chambers). The launch of this beer also marks the start of a partnership between the Beats, Rhymes & Life Podcast and Uiltje. Besides a joint monthly updated playlist, the release of ‘Enter the Waimea’ is celebrated with a special BRAL. podcast, in which the legendary record is discussed in detail.

“With Uiltje, we’ve been looking to connect with music for some time now.” explains Bart van Kleef, Head of Marketing & Branding at Uiltje Brewing Company. “We already did that actively by promoting our own playlist and by releasing several specialty beers in the past, like the ‘California Love’ or ‘the Fresh Prince of Bravo. Those releases show it; we’re just kind of suckers for that 90s music. With the release of ‘Enter the Waimea’, it feels like a logical step to connect even more with fans of hip-hop from the heyday.

“Uiltje is outspoken and creative. In the beers they brew, but also in the expressions. It just matches up nicely.” outlines Michel Lindenborn, co-host and producer at BRAL. the collaboration. “We share the love for 90’s hip hop, without closing ourselves off to new music. With our playlists and podcasts, we hope to provide fans with hip-hop they already love ánd tickle them a little with music they don’t know very well yet.”

The collaboration kicks off with a BRAL. special on the groundbreaking ‘Enter the Wu-Tang’ (36 Chambers). In the podcast, co-host Casper Knipscheer, as a former European Tour Manager for several Wu-Tang Clan members with first-hand accounts, gives more background on the creation of the debut record. In addition, BRAL. leaning on their own walking encyclopedia and co-host Nick Hoogzaad, curates a monthly playlist for Uiltje. That list starts with a strong selection from the rich oeuvre of the American hip-hop legends.

“When the world opens up a bit again soon, we’ll see a lot more great opportunities,” Bart concludes. “With the network of BRAL., our joint creativity and the possibilities that our brewery offers us, in the coming months we will see if we can strengthen each other with cool actions and events.”

The BRAL. X Uiltje ‘Enter the Wu-Tang’ Special can be found above. Also check out the limited edition NZ Double IPA ‘Enter the Waimea’. The Uiltje x BRAL. Beers, Rhymes & Life’ playlist is refreshed monthly and the first version, chock full of Wu-Tang classics can be found here on Spotify.

Craft beer, poured from a can, paired with a high end five-course menu. Most top of the class restaurants...
News

The Drive-Through is closed, but it looked like this!...
News

The flight of alcohol-free beer is undeniable. In 2020, sales of non-alcoholic beer increased by 8.5%. A windfall for...
News

Don’t bullsh*t, just brush! Or, as we say here in the Netherlands: ‘niet lullen, maar poetsen’. And poetsen is...
News

With this blog we’re going to look into the importance of cleanliness in a brewery – after all, whilst...